Love the use of Infographics to pull band popularity data. 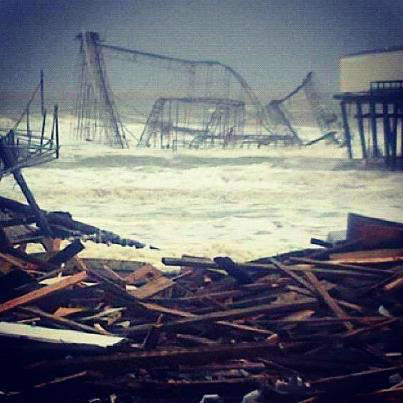 The US East Coast courtesy of Hurricane Sandy

When I woke up this morning and went outside, all I could think of was global warming. Look, I have lived in New England for 38 years and I have never seen a hurricane travel this far up the coast and cause this much devastation. Life throws you signs and it is up to us to pay attention to them. Last night, mother nature threw us a sign, and has been for awhile now (see Katrina and drought). I believe it is time to take global warming seriously and begin to take measures to reduce each person’s carbon footprint.

The next question is, what can I do? Well it starts with making sure that our elected officials are thinking intelligently about not just our economy, but our planet. Without a clean and healthy planet, there will be no economy. So it got me thinking about our presidential candidates. I already know Obama’s stance, so what about Mitt? Here is what I learned about Mitt Romney:

The bottom line is this, Social Media is a tool that can be used to responsibly report facts. Mitt Romney is showing here he will say anything to get elected and really doesn’t care about global warming or believe it exists. So with that, does Global Warming exist? Check this out:

So I ask the question to Mitt Romney, what are you going to do about the fact that our planet is warming, other then drill for more oil in North America? You have 7 days to answer the question the gentleman asked you in the second video above.

2013 Presidential Candidates Lying? Here’s A Solution To Keep Them Accountable!

Steve Benen of the Maddow Blog highlighted the lies associated with Paul Ryan’s GOP Convention speech last night. So the question begs to be answered, who is keeping politicians and presidential candidates accountable? It is supposed to be the press and the bloggers, but lets be honest here….it isnt working and the lies continue. It is making a mockery of the American Press and it is making American’s look like they will believe anything anyone says as long as they shave, shower and brush their teeth.

So here is my solution. How many of you are familiar with the ESPN Show – Around The Horn? The show is unique as it “scores the argument” – points are awarded to or taken from panelists (made up of sports reporters) at the discretion of the host- depending on the strength or weakness of their arguments or the factual representation. The rewarding – and deduction – of points has changed throughout the series. Originally, being muted cost a panelist five points. Later, the scoring was at its most strict: “good” answers were awarded two points, “great” answers were given three, and a mute subtracted three points from a panelist’s score. The end of every episode they do a fact check round up. During the fact check they tell the reporters where they were false on their statements and give the correct information to the viewers and to the reporters. Having that line of checks and balance keeps the reporters honest and keeps the show factually based.

Check out this Around The Horn commercial break, it makes the point about point additions and subtractions in a fun way. In the end though you will see where I am going with this.

Imagine having that kind of point structure and accountability for speeches and debates? It would keep both sides of the political fence factual. But the key is to make it an intermediary host  that is applying/subtracting the points and also giving the factual break down at the end of the debate or speech. There! problem solved! What say you?

How Colleges Are Using Social Media To Recruit

Another great infographic. This one does a great job of being a case study of Social Media success for Universities.

This is a great example of how Infographics can be used to explain something in layman’s terms. Here, inflation is explained by comparing the cost of a family vacation in 1960 compared to today. Check it out!

On The Road Again – Graphic & Marketing by Yellow Robin

If you aren’t utilizing infographics and are in business, you are missing out. You can make many friends by creating valuable Infographics for your fans/customers, partners and even your staff.

I am an Analytics junkie! Love it actually…to the point where I generally tend to let it dictate my life. So it would stand to reason I decided to start thinking about who I will vote for in the fall. I sifted through data and came to the conclusion that Obama is doing a bang up job, contrary to what Mitt Romney has been saying.

That is alot of green! Seems like an awful lot of positive…no?

The total reserves have risen 30% at last report.

Import of US Goods (to other countries)

Back in January, Japan trailed America Auto Sales for the first time in 14 years.

Also, he fulfilled his promise to leave Iraq and issued the order to take down Osama Bin Laden. All in all, it has been a success considering the mess he was handed in 2008 and a useless House the last 2 years.

Is there work to do? Yes! He needs to lower the National debt, continue to fix the housing crisis, continue to lower the unemployment. But proof is in the data. If voters pay close attention they will see that our country is on the right path. Data doesn’t lie! Calling a spade a spade!

Guy Kawasaki talks about how to be enchanting!

I recently attended the Inbound Marketing Summit in Boston. I had been looking for Guy’s session online, but haven’t been able to find it. However, the video attached is a very close representation to what he talked about when I saw him. It is valuable for business and in life. Cheers to crows feet!

Another good idea from Warren Buffet

My sincerest apologies for not posting here in awhile. I have been knee deep in working on couple new websites fro EDR and getting married. As such, I was much too busy to do something as selfish as blogging. 😉 Anyways, the following idea from Warren Buffet was in my In-Box 8 times this morning. 8 times over night? I would call that viral…wouldn’t you? Another example of invaluable content is truly king. Lesson: Don’t just post for the sake of posting, think about your brand and what is valuable to the end users. If you do that and create value…you win.

Here is Warren Buffet’s great idea. Please share and pass it along if you agree. Happy Halloween everyone!

Subject: another good idea from Warren Buffet
Warren Buffett, in a recent interview with CNBC, offers one of the
best quotes about the debt ceiling:
“I could end the deficit in 5 minutes,” he told CNBC. “You just
pass a law that says that anytime there is a deficit of more
than 3% of GDP, all sitting members of Congress are ineligible
for re-election”.

The 26th amendment (granting the right to vote for 18 year-olds)
took only 3 months & 8 days to be ratified! Why? Simple!
The people demanded it. That was in 1971 – before computers, e-mail,
cell phones, etc.

Of the 27 amendments to the Constitution, seven (7) took one (1) year
or less to become the law of the land – all because of public pressure.

Warren Buffet is asking each addressee to forward this email to
a minimum of twenty people on their address list; in turn ask
each of those to do likewise.

In three days, most people in The United States of America will
have the message. This is one idea that really should be passed
around.

A Congressman/woman collects a salary while in office and receives no
pay when they’re out of office.

3. Congress can purchase their own retirement plan, just as all
Americans do.

4. Congress will no longer vote themselves a pay raise.
Congressional pay will rise by the lower of CPI or 3%.

6. Congress must equally abide by all laws they impose on the
American people.

Congressmen/women made all these contracts for themselves. Serving in
Congress is an honor, not a career. The Founding Fathers
envisioned citizen legislators, so ours should serve their
term(s), then go home and back to work.

If each person contacts a minimum of twenty people then it will
only take three days for most people (in the U.S.) to receive
the message. Don’t you think it’s time?

THIS IS HOW YOU FIX CONGRESS!

If you agree with the above, pass it on. If not, just delete.
You are one of my 20+ – Please keep it going, and thanks.

Infographic on Mobile Usage in 4 Years

I came across this graphic. If your organization is not using mobile, or considering using mobile, look at this Infographic on projected data usage via mobile in the coming years. Wouldn’t your company want a cut of those stacks? Can your company afford to not try? I feel like this document is game, set, match for those organizations on the fence about mobile. It is a no brainer!